It's raining a ton in Florida right now, and while I'd normally be in gloomy day heaven, I can't help but think, "this doesn't feel like Fall." It was hot as shit yesterday and the humidity destroyed my hair. I can barely get two whole days of dirty hair down here before my mane just looks yuck. There's no foliage; no purples, mustards or reds. I love palm trees and the beaches and all, but just not during my favorite season. I've spent the morning looking out the window, watching the rain fall and thinking of what the weather is like in New Jersey and New York right now. How there's sunlight during the day but it's chilly enough to require a jacket. I'm even yearning for the smell of a northeastern fall. The smell that never lasted quite long enough before the harsh winds of winter left marks on your cheeks and made your ears wanna cry. What I'm trying to say is, you shouldn't have back sweat stains on your shirt in October. And speaking of shouldn'ts, I know I shouldn't be complaining. I do remember how much griping I did every year when winter seemed to overstay its welcome (by months!), but it's funny how you can miss the things that irk you.
I'd give anything to be walking through Central Park right now, holding hands with Mikey and eating a pretzel, or walking down any of my old favorite pathways on FDU, heading to my next class while stopping to take pictures of the same mansion and the same towering trees, like I did just about every single day during my two and a half years there.
Posted by yours truly: Roni E. at 7:40 AM 2 comments 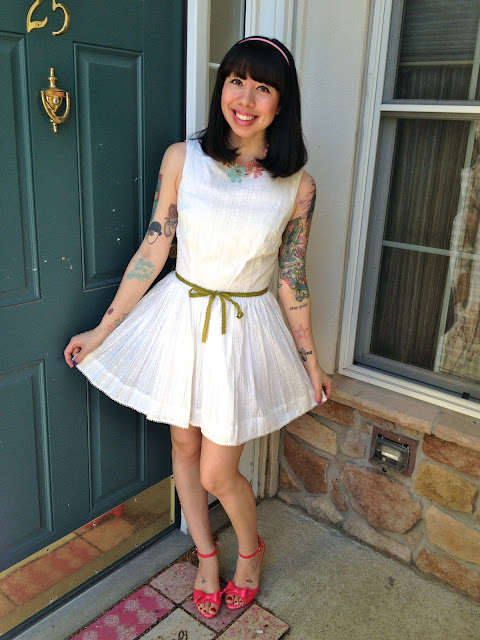 You may or may not be able to tell, but when I took these pictures the other day, I was headed to school and I hadn't slept in almost 30 hours.
Mikey's been in Florida, working at his new job (and doing exceptionally well, I must add) for the last month and some change. I've been here in Jersey, finishing up my semester and living with his dad. Most girls can't handle separation from their husbands, I think I do it just fine. But I'm not most girls (and it also helps that he's not in Iraq this time--I admit, I didn't handle 130 days of that so great in the beginning, but that's different--there isn't much of an FPCON level in Fort Myers, Florida). I love my alone time and when I have it, I cherish it by spending a good amount of time thinking, reading, drinking wine, listening to music, taking bubble baths, painting my nails, writing in my journal, and watching a shit ton of Arrested Development (but you already knew that). I have my whole life to spend with Mikey, so there's no sense in me crying everyday that I miss him so much. It goes without saying that I do. But I've also always been abnormally independent. It doesn't mean I don't love as much, I just do it differently I guess. Why am I even saying all this? To show how strong I am? I don't think so. Quite the contrary I suppose. You see at night, that's when everything becomes a bit more challenging. I'm used to Mikey sleeping next to me. I guess in that aspect, I've grown very dependent. In bed with him, I sleep better. Like a baby. Since he's been gone, I haven't had the best sleep. I've been averaging about four hours a night during the week--if I sleep at all--but come the weekend, I can be in bed by nine or ten p.m. and sleep well past noon the next day. (Maybe school is just stressing me the fudge out and that's why I can't sleep during the week? Who knows.) I recently purchased a bottle of "Sleep Aid Maximum Strength" at Target; the lady at the pharmacy counter told me it's really just Benadryl and that she recommends it over Melatonin (which is what I usually take) if you're having honest to goodness trouble sleeping. It obviously works like a dream, but I've been trying not to take it every night, so as to give myself the opportunity to fall asleep naturally. I was godawful tired tonight, so I resisted the sleep aid and what do you know? It's 4:37 in the morning and I have class at 9:55...
If any of you have suffered from this ruthless bitch, Insomnia, and have any remedies that might work, feel free to send them my way. 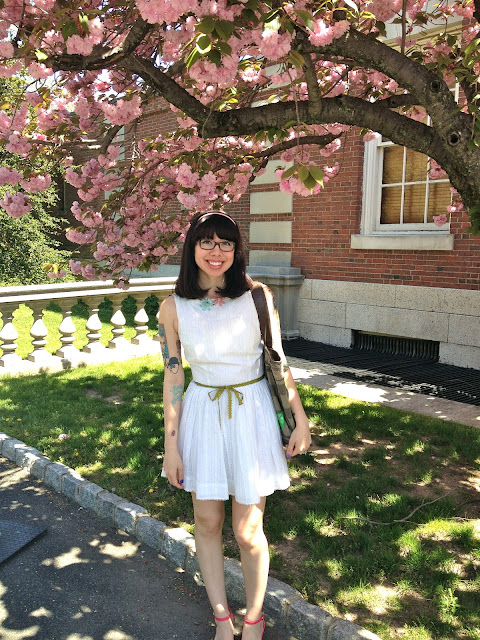 Vintage 1950's dress from The Attic in Las Vegas (it was a gift from Mikey on our 1 year anniversary)
Gem stone floral necklace: Anthropologie 2010
Mel by Melissa "Apple" Bow Jelly Sandal (mouthful)


In other news, Spring has finally sprung in New Jersey. It's beautiful, especially on FDU. And oh yeah, I suppose it's been a while since I posted (shocker), so I have new hair. Hiiiii. K bye.

P.s. I start my week long road trip to head south to Florida next Friday after my final exam! I'm making a few pit stops along the way to see some old bffs, my mother-in-law, and maybe meet up with some girls who I adore from IG (I'm spontaneous-and crazy-like that). Can't wait!
Posted by yours truly: Roni E. at 1:38 AM 22 comments

smiles, pleasantries, and a car wash: how to make my day *slash* I love when people are nice to me 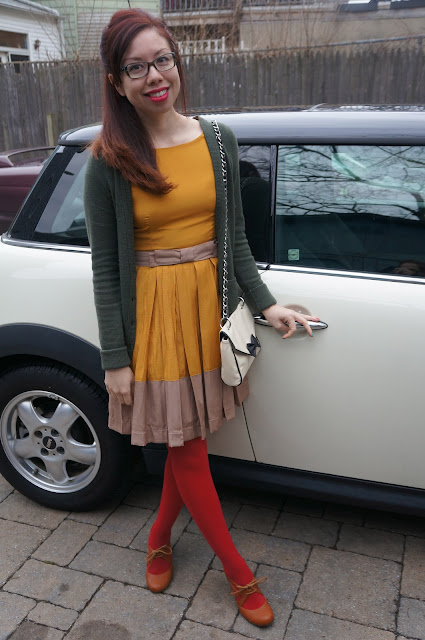 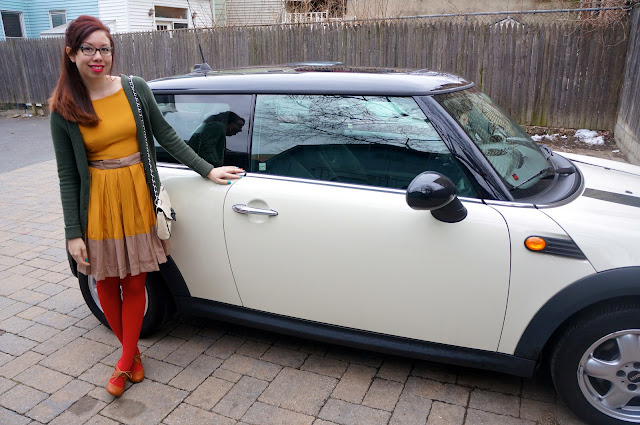 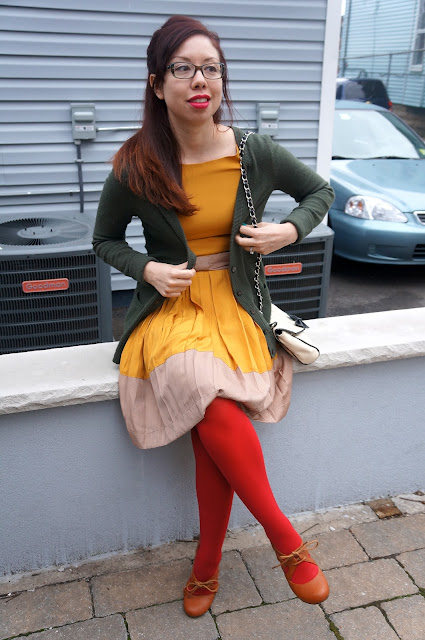 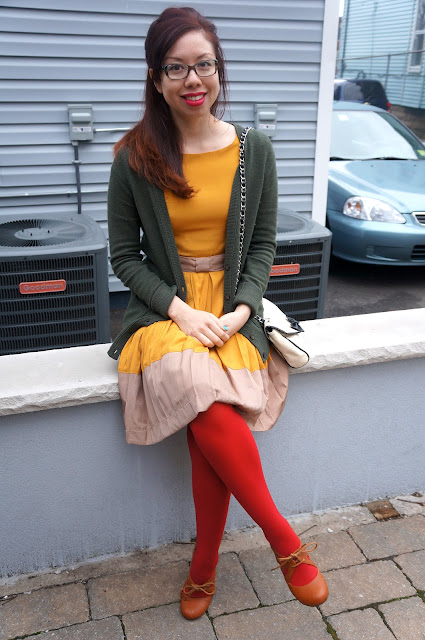 Note: If it wasn't clear, I don't think east coasters are assholes; I think we're all kind of assholes with the potential to be really nice...and vice versa.
Posted by yours truly: Roni E. at 9:05 PM 11 comments 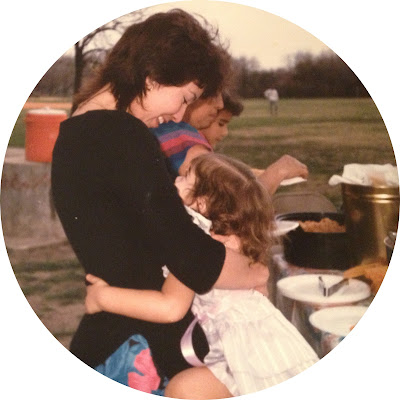 I can't wait till the next time I go home. I know my mom and I will do lots of laughing, talking till the wee hours of the morning, and get pints of Blue Bell ice cream to eat while we sit on the couch and watch movies. And of course, she'll make me menudo.
One day, I'll live in Texas again and she'll only be a drive away.
Posted by yours truly: Roni E. at 9:55 PM 5 comments

Guys, here are some pictures that never made it to the blog because I decided to take that long break. These are from November, right after I made it to my first blogaversary and Mikey bought me a celebratory dress for the occasion. We were at school and there were tons of leaves everywhere so naturally, I played in them. Here are the photos. 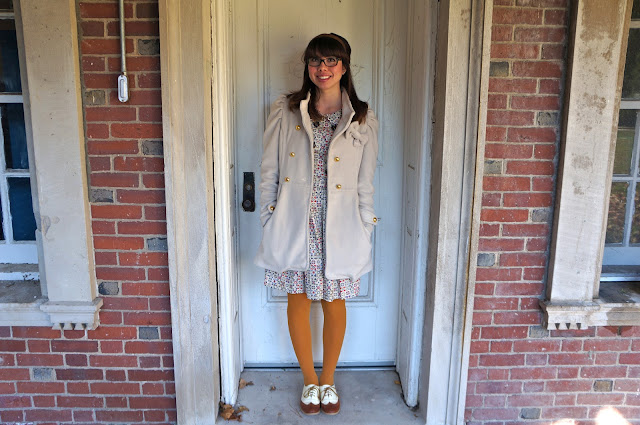 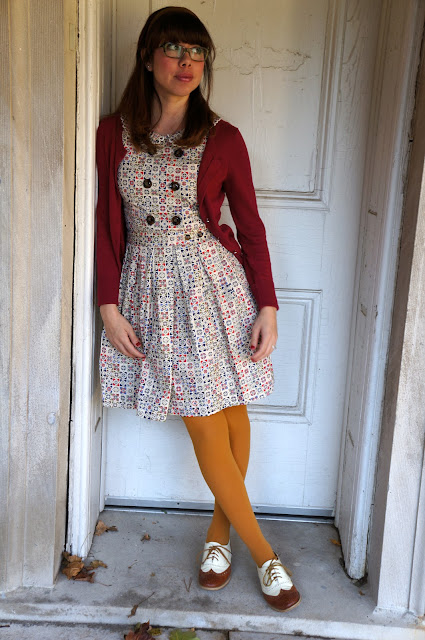 This is one of my favorite dresses to play with. It looks so different/lovely/perfect with heels! If I could own everything Dear Creatures puts out, I'd be the happiest girl everrrr. 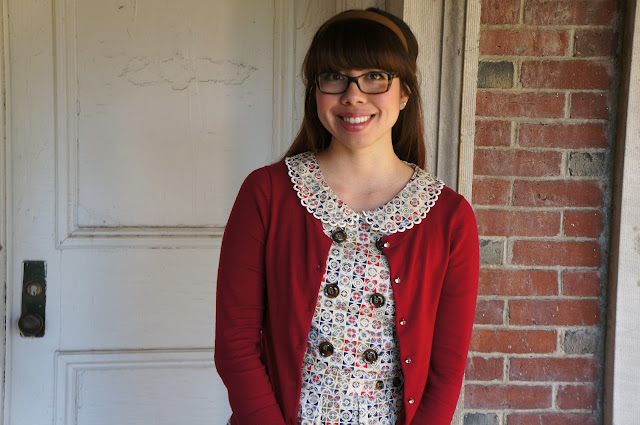 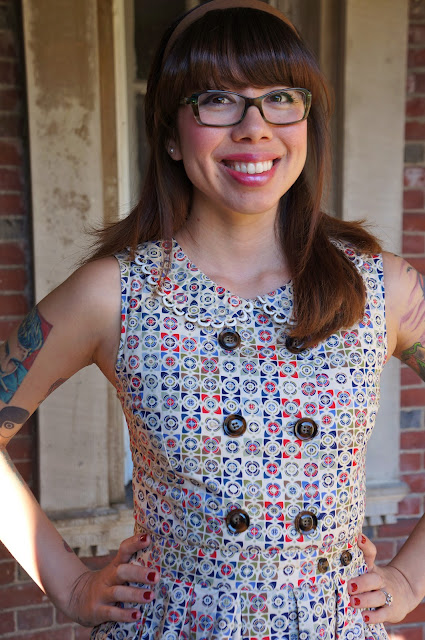 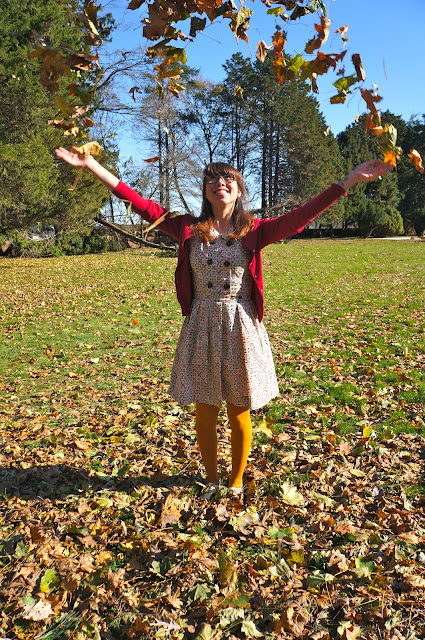 I think that last one is a pretty neat shot, if I may be so boastful. Good job, Mikey.
How many of you know that The Early November is--well, was--a band? They used to be one of my favorites, back in my emo days. It's still fun to play them in my car and reminisce on past times (especially with this song). Not only that, the early part of November is also my favorite time of year. The air just smells and feels better. And it reminds me of chilly nights in 2002 when I first began my adventure in the military (I was so young!). I wrote a little personal essay about that last year, maybe I'll share it one day.
Anywho, I hope you're all having a relaxing Sunday.

(If you don't watch Fashion Police on E! then this post title is probably making you go "what the fu??") 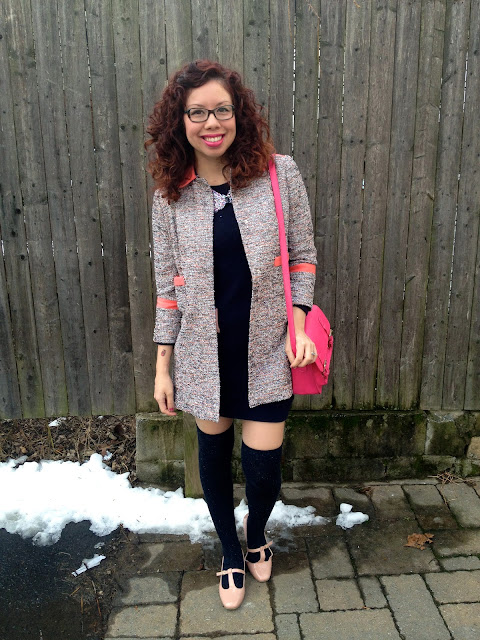 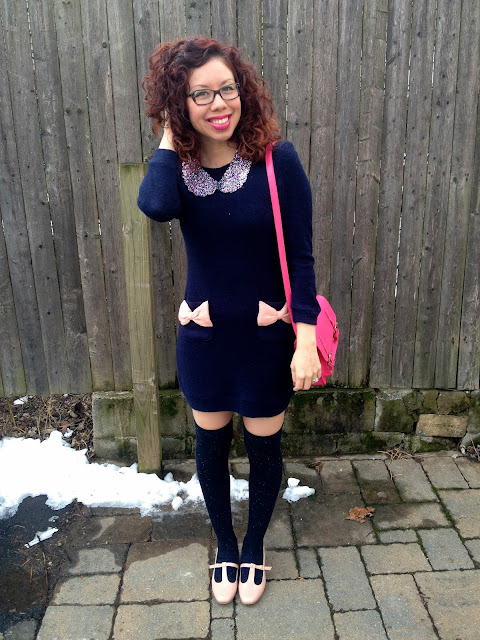 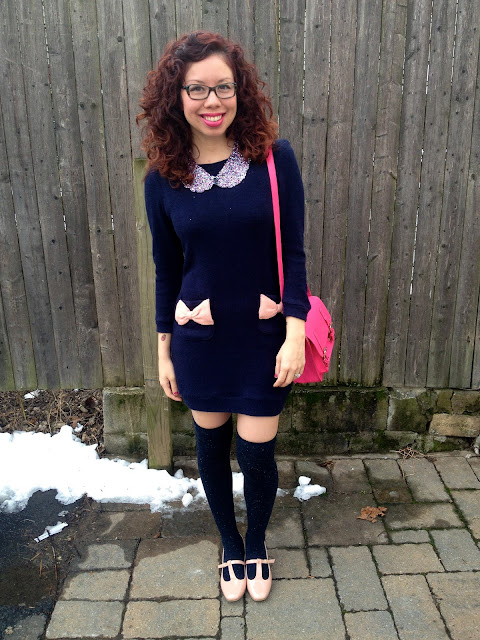 I wore this--what I initially thought as cute--little number last month to sort of pay homage to two of my favorite movies: Pretty Woman & Clueless. But boy, did people look at me like I was strictly a streetwalker (what kinda hooker have you seen wearing pink bows and baby pink flats?!). All because of about 2.5 inches of exposed thigh. I felt all kinds of uncomfortable wearing this at the grocery store after I felt many a'pairs of eyeballs shooting death stares at me, mainly female ones. Which, I don't understand. Why are women such bitches sometimes? I mean, I could understand if my boobs were out so much that newborn babies were tempted to suckle, or if this dress was see through and I was wearing a thong, or if I was winking at the men that these women clutched onto so tightly, but clearly I wasn't. I was simply holding the hand of my husband and picking out which cereal I wanted: Fruity Pebbles or Cap'n Crunch (I went with the latter, obviously).
When I see a girl in a cute, out of the ordinary outfit, I actually go up and tell her that she looks lovely. But that's just me. I'm not saying that strangers should line up to commend me on my great fashion sense (though I wouldn't turn fans away ;)) , but jeez louise, if you don't like what I'm wearing is it really going to make you feel better to stare at me like I just killed five kittens?
Really, it all comes down to this: if you don't have something nice to say then shut the fuck up and look somewhere else. Right?

Note: I am not at all mad today, I was just recalling my emotions. Sorry that I had to use vulgar language. It was necessary.

Who says you can't use an iPad case as a clutch?? Especially when it's a darling Ted Baker one with a center bow. Well, you can. I just did....and I don't own an iPad. 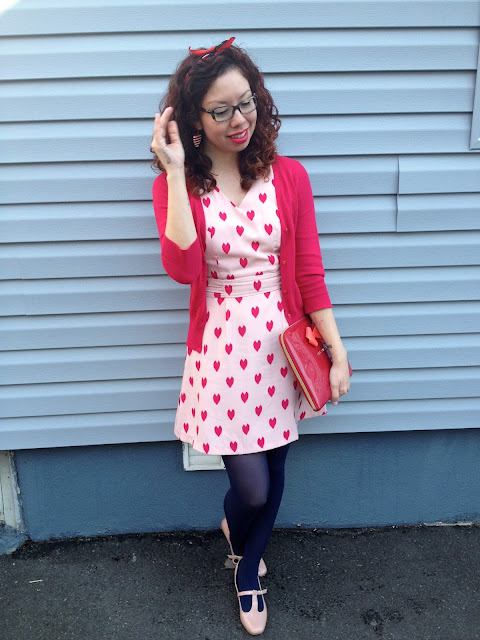 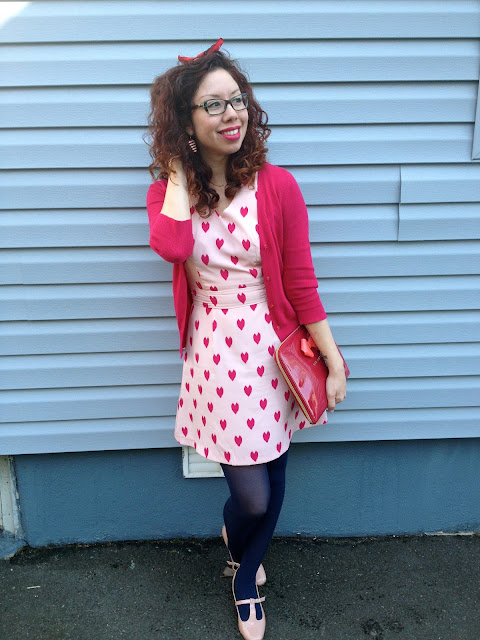 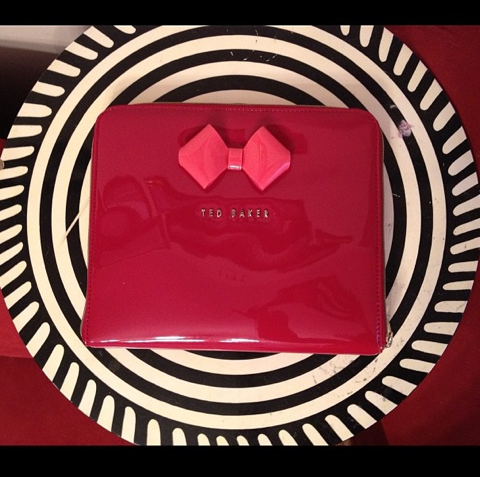 Hi, I'm Roni & I'm married to the greatest guy in the universe, Mikey. I was in the Air Force for 8 yrs (I lived in Oklahoma City & Las Vegas). I have lots of tattoos *I hate when people ask if I'll regret them down the line* Tattoos, to me, are the artistic documentation of who I am, where I've been at a point in my life, and what I like. Even if I no longer am super fond of certain things that I have tattooed, I still look at them as reminders for who I was when I did. Plus my tattoos are very colorful and bubbly, like me! I can't stand people who auto-dislike people with tattoos. It's a form of prejudice and it's NOT okay. Most of us are decent human beings with good ethics and morals; we're not all former gang bangers. Stop being closed-minded. I'm originally from San Antonio - I'm a proud Texan! We currently reside in New Jersey for college. We have two dogs (Jaxon and Bowie) and a cat, Danzig. Oh, and all my best friends are thousands of miles away, scattered throughout the country.
Click here for more...